According to Maryland Poison Center the lethal dose is unknown. However, it’s estimated that 2 milligrams of fentanyl can be fatal, therefore as little as 200 micrograms of carfentanil might be lethal, a dose that is 1/100th of the amount shown next to the penny in the DEA photograph. DEA, local law enforcement and first responders have recently seen the presence of carfentanil, which has been linked to a significant number of overdose deaths in various parts of the country. Improper handling of carfentanil, as well as fentanyl and other fentanyl-related compounds, has deadly consequences.

In any situation where any fentanyl-related substance, such as carfentanil, might be present, law enforcement (and Fire/EMS and volunteers) should carefully follow safety protocols to avoid accidental exposure.

Carfentanil is used as a tranquilizing agent for elephants and other large mammals. The lethal dose range for carfentanil in humans is unknown; however, carfentanil is approximately 100 times more potent than fentanyl, which could be lethal at the 200-microgram to 2-milligram range (see above), depending on route of administration and other factors.

“Carfentanil is surfacing in more and more communities.” We see it on the streets, often disguised as heroin. It is crazy dangerous. Synthetics such as fentanyl and carfentanil can kill you. I hope our first responders – and the public – will read and heed our health and safety warning. These men and women have remarkably difficult jobs and we need them to be well and healthy.”

Carfentanil and other fentanyl-related compounds are a serious danger to public safety, first responder, medical, treatment, and laboratory personnel.

These substances can come in several forms, including powder, blotter paper, tablets, and spray – they can be absorbed through the skin or accidental inhalation of airborne powder. 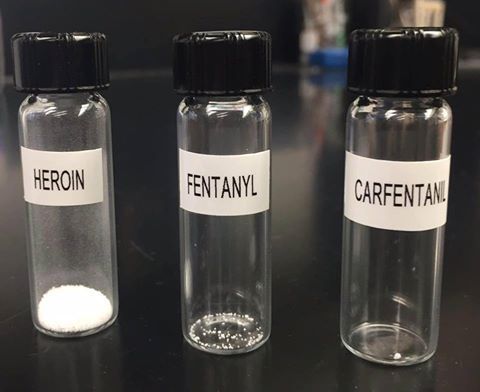 Acryl-Fentanyl, a type of Narcan-resistant Fentanyl has been found in batches of heroin and it’s already causing numerous overdoses and deaths. Apparently, it’s hundreds of times more powerful than morphine. There is a distinct difference between Fentanyl, Carfentanil and Acryl-Fentanyl. Believe it or not, Fentanyl and Carfentanil actually have legitimate, medical uses. Fentanyl is an extremely strong painkiller that’s usually given to patients before or after surgery and for those who are terminally ill. Carfentanil is, well, an elephant tranquilizer and has veterinary purposes. But Acryl-Fentanyl has no known purpose for even existing… and it’s highly troubling that it’s been synthesized.

If encountered, responding personnel should do the following based on the specific situation:

Exercise extreme caution. Only properly trained and outfitted law enforcement professionals should handle any substance suspected to contain fentanyl or a fentanyl-related compound. If encountered, contact the appropriate officials within your agency.
Be aware of any sign of exposure. Symptoms include: respiratory depression or arrest, drowsiness, disorientation, sedation, pinpoint pupils, and clammy skin. The onset of these symptoms usually occurs within minutes of exposure.
Seek IMMEDIATE medical attention. Carfentanil and other fentanyl-related substances can work very quickly, so in cases of suspected exposure, it is important to call EMS immediately. If inhaled, move the victim to fresh air. If ingested and the victim is conscious, wash out the victim’s eyes and mouth with cool water.
Be ready to administer naloxone in the event of exposure. Naloxone is an antidote for opioid overdose. Immediately administering naloxone can reverse an overdose of carfentanil, fentanyl, or other opioids, although multiple doses of naloxone may be required. Continue to administer a dose of naloxone every 2-3 minutes until the individual is breathing on his/her own for at least 15 minutes or until EMS arrives.
Remember that carfentanil can resemble powdered cocaine or heroin. If you suspect the presence of carfentanil or any synthetic opioid, do not take samples or otherwise disturb the substance, as this could lead to accidental exposure. Rather, secure the substance and follow approved transportation procedures.

Carfentanil is a fentanyl-related substance not approved for use in humans.
"Fentanyl can kill you,” Fentanyl is being sold as heroin in virtually every corner of our country. It’s produced clandestinely in Mexico, and (also) comes directly from China. It is 40 to 50 times stronger than street-level heroin. A very small amount ingested, or absorbed through your skin, can kill you.”

Reports say there is now a new form of heroin hitting the US laced with a type of fentanyl that can be resistant to the life saving drug Narcan.

According to the DEA, Acryl Fentanyl is being manufactured overseas, smuggled into the US, and mainly sold on the web.

"It's a Schedule I drug, so this one has no medical use at all. At all. So it's here illegally, basically it serves no legitimate purpose.

Acryl Fentanyl comes in powder form and looks similar to fentanyl. Even a narcotics expert could not tell the difference with a naked eye.

Fentanyl, carfentanil and other fentanyl-compounds are responsible for an epidemic of overdose deaths across the United States. There are now multiple reports of police calling in hazmat teams during overdose calls so ALL first responders need to be careful and be aware of your surroundings as much as possible when responding to ODs and narcotics-related calls going forward.