Amber Glass with Boyd and Lucinda 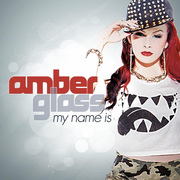 Oklahoma City - When rapper Eminem made his 1999 debut with the ground breaking hit "My Name Is" from his "The Slim Shady LP" project, he turned the music scene upside down and positioned himself as the "Rap God" he is today. Fifteen years later, female rapper Amber Glass is vying for the "Rap Goddess" throne. Spitting fierce lyrical fury with feminine flow, the new artist, from Power Moves Media, pays tribute to the rap legend with a bold, unapologetic remake of his "My Name Is" single via a vibrantly viscious video release. With a brilliant display of in-your-face imagery, twisted flavor and seductive finesse, the video and the song mimic the original track but with a wild woman twist !

Influenced by Eminem, Tupac and Nas, Amber started rapping at the age of 17. Working her way around the local hip hop scene in Oklohoma City, Power Moves Media artist Young Star initially took note of her skills and convinced Nitro to sign her.

"Amber Glass is indicative of what Power Moves Media is all about. She shatters your perceptions of her when she opens her mouth to rhyme. Her verses knock out the competition. She is spearheading our roster of releases, paving the path for the power moves we have planned," notes Nitro.

"My Name Is" was shot in Phoenix, Arizona and directed by Carlos Berber. The video is a scene by scene reenactment of the original "My Name Is" video, with Amber swapping out Eminem's moniker for her own and tweaking the lyrics with her own risqué rants. "My Name Is" pops with the same zany antics as the original release but resonates with 2014 sensibility.

"For me as a white girl, Eminem was a powerful reflection growing up. He showed me what I had the potential to do. He kicked down walls and built up new ones. I'm not trying to be a female Eminem though, I just wanted to pay homage to him for making a way for artists like me. If is sees "My Name Is," project I hope it makes him proud because he was a great inspiration to me."

RSVP for Amber Glass with Boyd and Lucinda to add comments!