Boxing notables were in attendance and working the corner

The Phoenix Boys Center hosted "Amateur Boxing Fight Night" on Saturday, Dec. 15 at the American Legion Post 2 in Tempe and was Sponsored by The Streets Don't Love You Back Movement. The bout was sanctioned by USA Boxing Arizona, the governing body for amateur boxing in Arizona.

Some boxing notables were in attendance and working the corner for a few of the boxers in the eleven bout card. NABF Lightweight Champion, Ray Beltran, former World Flyweight Champion, Michael Carbajal and former heavyweight boxer, Tony Fulilangi all worked the corner of some of the bouts. 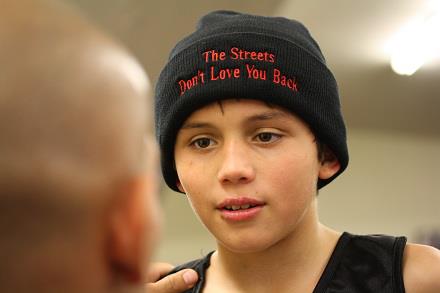 AMATEUR BOXING FIGHT NIGHT
Beltran, a sparring partner for Manny Pacquiao has made a name for himself on his own of late, re-inventing his career with impressive wins over Hank Lundy and Ji-Hoon Kim. We can now add corner man to his resume. Beltran worked the corner for 10-year-old Aaron Garcia out of Fuentes Boxing Club, a 75 lb. scrapper with some game. Garcia battled Jahiem Willis of Stonehard Gym, also a 10-year old kid who has some serious game. Both boxers displayed great skill for their age, but in the end Garcia would be awarded the win.

In what would be awarded the "Best Bout," 15-year-old Alan Gonzales out the Gene Lewis Boxing Gym defeated Jose Santillan of Rodriguez Boxing Club in the 132 lb. Division. It was toe-to-toe action the entire fight, both fighters traded punches with skill and accuracy.

An exciting super heavyweight bout between Levi Brooks out of Stonehard Boxing, and Sione Tava out of the Phoenix Boys and Girls Center was full of emotion as both boxers fought with skill and heart. Both fighters were throwing some hard blows, Tava getting the better of a tough Brooks. Tava, trained by former Heavyweight Professional Boxer, Tony Fulilangi of Tonga fought like he was competing for a gold medal. Fulilangi had an impressive career as a pro, his final fight was against George Foreman. Tava, also a Tongan had a large fan base of Tongan fans in the crowd. The two boxers showed great skill, both landed punches with great accuracy, and both most definitely have a chin. Brooks, trained by Damien Stone is the largest boxer out of Stonehard Gym. Referee Richard Soto made a good call stopping the fight in the final round, preventing Brooks from injury after taking some hard head shots.

Former Super Flyweight Champion and boxing legend, Michael Carbajal worked the corner of his fighter, Alvaro Martinez who was debuting in his first fight as an amateur. Martinez works out of Carbajal's 9th Street Gym. Carbajal fought Humberto Gonzalez in 1993, being the first fighters in history to earn $1 million in the light flyweight division. Martinez faced Doug Alvarez fighting out of Aztlan Boxing Club in the 132 lb. Division. Martinez put up a good fight and has potential, but fell short as the win was awarded to Alvarez.