Candlelight vigil for 17-year-old Jerean Blake held Wednesday night, the place he collapsed after being shot in the chest at close range after being accused of looking at a guy the wrong way. 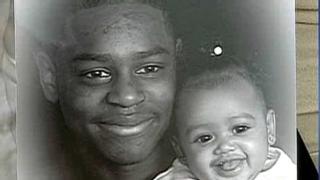 Listen to the video interviews on our website. www.thestreetsdontloveyouback.ning.com

Listen to the EXCLUSIVE INTERVIEW with Lyvonne Cargill, the mother of 17-year-old Jerean Blake, on “Your Voice with Angelo Henderson” as she describes what happened the day her son died and who she believes is responsible for his murder.

We morn the death of little 7-year-old Aiyana Jones along with her family and friends. She was killed by police and investigations are underway. But there’s also another family grieving – the family of 17-year-old Jerean Blake. He was gun down on Friday and the suspected killer fled to the home of Aiyana. News reports describe Blake and his friends went to McDonald’s after school and then stopped by a strip mall to grab some juice. It was there when he crossed paths with alleged suspect 34-year-old Chauncey Owens. Owens, who was on a moped, reportedly asked why the Southeastern high school senior was looking at him – apparently in some suspicious way. Owens then asked Jerean if he had some sort of beef with him. First-hand accounts say Jerean was not aggressive and really didn’t talk much. Owens left and returned in a SUV and is accused of shooting Jerean Blake in the chest at close range. Police found the van – and some reports say the moped – tied to the home of Aiyana. Owens was arrested at the scene and charges are pending. Meanwhile, now Ayiana’s father – Charles Jones – is being questioned by police.