By LAURENCE ILIFF And DAVID LUHNOW

MEXICO CITY—Mexican drug cartels have already bullied newspapers and television stations into gagging their coverage of the bloody battle between drug gangs in parts of the country. Now they appear to be taking aim at a new front: social media and the blogosphere.

In the border city of Nuevo Laredo in late September, police found the severed head of a narco-news blogger who called herself the "NenaDLaredo," or "Girl from Laredo," next to a keyboard, computer mouse, headphones and small speakers. 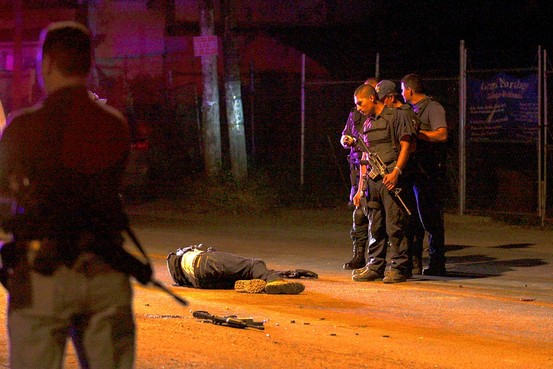 
Social media sites are providing valued tips about drug-related violence, such as this shootout that killed three outside Guadalajara city last month.

Track the increasing violence in an interactive map. 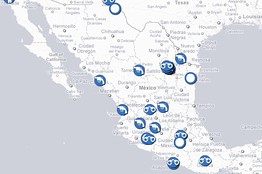 A message left at the scene linked the killing of the blogger, Maria Elizabeth Macias, to her online activities in Tamaulipas state, and warned other social media users they could be next. It was signed with the letter Z, the sign of the Zetas drug cartel.

The killing appeared to be the first documented case of a journalist in Mexico being killed for posting on a social media site, says the Committee to Protect Journalists, a nonprofit based in New York.

Just weeks earlier, two bodies hung from a bridge in Nuevo Laredo also carried a cryptic note that cited three websites by name. But there was no indication so far that those victims were bloggers or journalists.

One blogger in northern Mexico who focuses on drug violence last week took the warnings seriously enough that he took down his blog because it identified him by name and has put up a new one under a pseudonym, said friends and fellow bloggers.

"The incident has people spooked, but most of us are pressing on because what we do is too important," says a contributor to the Borderland Beat blog, which covers the cartel wars in Mexico, who goes by @OVEMEX.

Mexico is one of the most dangerous nations for the media, the CPJ says. Before Ms. Macias's killing, at least six journalists had been killed this year alone, with at least one in direct reprisal for their work.

The cause isn't always clear. In some cases, journalists have been killed because they are on the payroll of one drug gang, and a rival gang takes revenge. But in other cases, bona fide reporters have been targeted.

Whatever the cause, the effect has been the same: In states including Tamaulipas, traditional newspapers have all but given up covering drug-related violence. For residents, social media sites such as Twitter and Facebook are often the only way to find out about street shootouts.

On Twitter, for instance, there are tags like #AcaFollow, for crime-related news in Acapulco, or #MtyFollow for cartel activity in the northern city of Monterrey. The contributors run the gamut from professional journalists to housewives who have developed their own expertise in cartel tactics.

As citizens try to fill the vacuum left by traditional media, they are being squeezed by the government, too.

In the eastern state of Veracruz, a schoolteacher and a freelance journalist were thrown in jail briefly last month for posting messages on Twitter and Facebook about cartel attacks that turned out to be false. Authorities said the postings led panicked parents to race to school, and caused several car crashes.

After facing the possibility of up to 30 years in prison for terrorism and creating panic, freelance journalist Maria de Jesús Bravo and teacher Gilberto Martínez were freed from jail and the charges against them were dropped. Meanwhile, Veracruz passed a law against upsetting public order with a maximum jail time of four years and/or a fine.

The slain writer, Ms. Macias, was a regular contributor and moderated a forum on a site called "Nuevo Laredo en Vivo." The site had lively discussions about the drug war, gave real-time information on confrontations between gangs in the city, and urged people to send any tips on cartels to the Mexican army and navy.

Ms. Macias's last post asked followers to give information about the Zetas cartel. "Hunting ratzzz, if you see where they run, denounce them." The use of the letter Z for an S in Mexico is a common way to refer to the Zetas gang.

Despite Ms. Macias's killing, her site defiantly continues, creating a hashtag for Laredo Girl so people can report on cartel activity in her name. Over the weekend, the site was filled with tips about shootouts, as well as posts that urged residents to not be afraid to give tips about the drug gangs. "There are more honest citizens than the bad guys, so let's not give up," said one anonymous posting.

The killing of Ms. Macias added to a growing debate in Mexico about the role of the Internet in the drug war. Blogs and social networking sites like Twitter have been praised for providing an alternative source of information for Mexicans. And the real-time nature of the sites could help authorities arrive at shootouts between rival gangs while they happen.

But the Internet has also been a useful tool for drug gangs, who often post gruesome videos of decapitations and other grisly crimes to threaten rivals and spook authorities. In some Mexican cities, authorities believe that gangs start rumors of impending attacks and spread them through social network sites in order to scare the population.

"These sites can be used to spread information, but it can also be used by drug gangs to spread fear or gather intelligence about what society thinks by monitoring the comments sections. If one site or another is being used by one or other groups, then they could be at risk," said Guadalupe Correa, a professor of government at the University of Texas-Brownsville who has studied social media in Tamaulipas.

Write to Laurence Iliff at laurence.iliff@dowjones.com and David Luhnow at david.luhnow@wsj.com