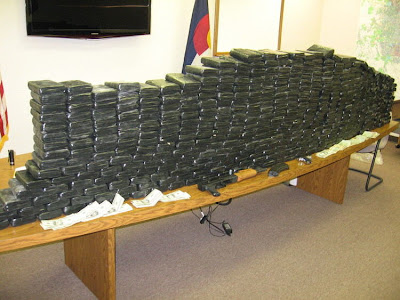 
A Colorado grand jury has indicted 23 people allegedly linked to the Los Zetas drug cartel in connection with a ring that prosecutors said on Monday smuggled $36 million worth of marijuana from Mexico in bogus tour buses.

The traffickers hid compressed marijuana in compartments affixed to the underside of the buses, the Jefferson County District Attorney's Office said in a news release.

"One of the most violent and feared Mexican drug cartels, Los Zetas, is believed to be the source of this marijuana distribution operation," the release said.

The 96-count indictment accuses the ring of smuggling 45,000 pounds of marijuana bricks from Durango, Mexico through El Paso, Texas, to a Colorado warehouse for street sale between April of 2010 and May of this year.

The alleged ringleaders, Conrado Arellano-Casas, 32, and Jose Jimenez-Chacon, 30, were among the suspects named in the indictment.

Arellano-Casas was apprehended in Colorado, where investigators also seized a loaded AK-47 rifle and $30,000 in cash from his home.

The defendants face an array of criminal charges, ranging from racketeering, conspiracy, distribution of a controlled substance, criminal impersonation, and illegal possession of firearms.

Eighteen of the indicted suspects are in custody, and five are believed to be in Mexico, but their exact whereabouts are unknown.

Ten of the suspects are believed to be in the country illegally and are under U.S. Immigration and Customs Enforcement holds.

The smuggling operation was uncovered when a motorist stopped by police in Colorado had narcotics in his possession and told detectives who his illegal drug source was.

A Colorado judge then approved telephone wiretaps of the suspected drug dealer, triggering a year-long investigation by federal and state law enforcement that ultimately led to the grand jury indictments.

The indictments were handed up last month, but remained sealed until as many arrests as possible could be made.

In addition to the marijuana seized in the probe, authorities confiscated 14 vehicles, seven firearms, two kilograms of cocaine valued at $64,000, 53 grams of methamphetamine, and $134,000 in cash.