Heroin that looks like concrete, called “Grey Death,” which is tainted with even more dangerous opioid drugs, has in triggered dozens of overdoses this year, including four fatal ones reported on Thursday in Alabama, Georgia, and Ohio.
It’s only the latest example of weird mixtures of deadly chemicals, chiefly the surgical painkiller fentanyl and its derivatives, turning up in the illegal drug marketplace.
“We are more routinely seeing deadly cocktails of heroin, fentanyl, various fentanyl-class substances, along with combinations of other controlled substances,”
More than 33,000 people nationwide died in 2015 from overdoses of opioid painkillers and heroin, more than died in car crashes. About 9,500 of those deaths involved fentanyl, at least 30 times stronger than heroin, and other “synthetic” opioids cooked up in a lab and imported from China, up from almost none five years ago.

CDC
Basically, heroin isn’t heroin anymore. In some East Coast cities, white powder sold as heroin contains only fentanyl, according to reports from April’s Rx Drug Abuse Summit in Atlanta.
Grey Death includes fentanyl and a related designer drug called U-47700, according to a Georgia Bureau of Investigations lab analysis. Those are the same two drugs linked to the death of Prince last year, pressed into counterfeit pain pills found with him when he died.

People physically dependent on opioids require regular doses of the drug to avoid searing withdrawal symptoms. Along with the euphoria the drugs deliver to brain cells that quickly become habituated, this dependence partly explains why someone would snort or inject something that looks like concrete. 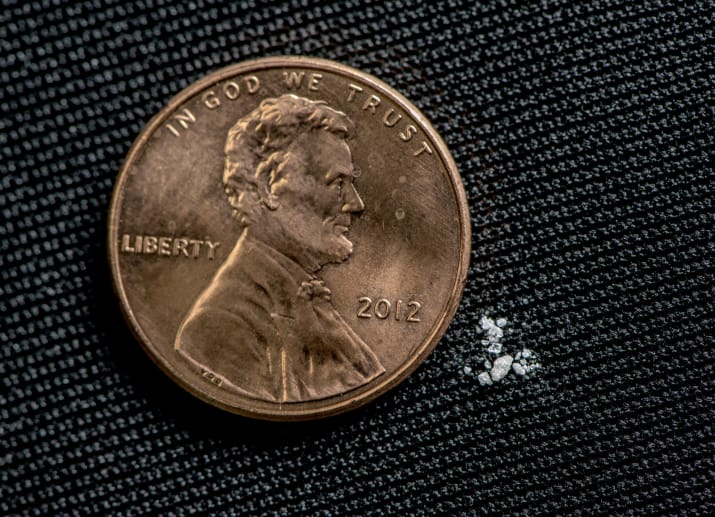 A fatal dose of fentanyl next to a penny.
The rise of fentanyl, an increase in the potency of what is sold as heroin, and a drop in its price has collided with a wave of people addicted to opioid painkillers, with around 300 million prescriptions a year. As police have shut down pill mills, fatal overdoses have shifted from pain medications to heroin, often spiked with fentanyl, according to the CDC. The drug is also turning up in seizures of cocaine, methamphetamines, and other illegal drugs.

“No one should underestimate the deadly nature associated with these cocktails,” he said. “You can buy one of these cocktails for $10 to $20 on the street and lose your life in a few seconds.”
Grey Death may be the descendant of gray pebble-like mixtures of heroin that law enforcement officials seized in San Diego, Chicago, and rural towns in Kentucky and Indiana in recent years. The Georgia Bureau of Investigations also reported on Thursday that a different synthetic opioid cocktail, made of U-47700 and furanyl fentanyl (a separate variety of fentanyl), has killed 17 people in the state in the last four months.

The chemistry of fentanyl and its chemical kin present a starker risk to addicts than heroin: Whereas a typical dose of heroin might require 15 to 30 milligrams for a fix (and even more for an overdose), just 1 milligram of fentanyl could get someone high and 2 or 3 milligrams could lead to a fatal overdose, leaving less room for error among drug-dealer chemists.