Mexican authorities captured a legendary Texan on Monday who is accused of a bloody climb to the top echelon of one of the hemisphere's most powerful drug cartels.

Edgar Valdez Villarreal, known as "La Barbie" for his looks, faces a slew of charges in Mexico, but also is wanted in the United States, where he has been indicted for smuggling thousands of pounds of cocaine into this country.

The U.S. government has offered a reward of up to $2 million for his capture.

In an interview with the Houston Chronicle late Monday, a Houston lawyer representing Valdez, 37, said he fears his client will be tortured or worse before he can be returned to the United States for trial.

"I do not think anyone is safe in the hands of the Mexican military" defense attorney Kent Schaffer said. "Something is going to happen."

Most recently, Valdez was indicted in Atlanta on federal charges he imported and distributed thousands of kilograms of cocaine from 2004 to 2006.

U.S. prosecutors contend the drugs were often smuggled north through Texas and then on to Atlanta, which is a hub for cartel activity in the Southeastern United States.

In turn, millions of dollars in proceeds were sent back to Mexico a similar way, according to court papers.

Valdez is said to have been a standout high-school football player in the Texas-Mexico border city of Laredo, where a coach nicknamed him Barbie for his hair and eye color.

It is unusual for an American to climb so high in the ranks of Mexican organized crime, but not unprecedented.

Texas-born Juan Garcia Abrego was captured in Mexico in the 1990s and sent to Houston, where he was convicted of drug-trafficking crimes as the head of the Gulf Cartel. He is now serving multiple life sentences.

A Mexican federal government source, speaking on the condition of anonymity, said Valdez was captured by federal police outside Mexico City and he was being held in the capital city at a secure location.

"A result of intelligence gathered by the modernized federal police force he was arrested in the State of Mexico," the source said.

Gary Hale, the recently retired chief of intelligence for the Drug Enforcement Administration's Houston Division, said Valdez could be among the top five traffickers in Mexico.

"It is a big deal to capture a cartel head who happens to be a U.S. citizen," said Hale, who is owner of Grupo Savant, a law-enforcement and intelligence consulting firm.

Hale said he doubts Valdez will be harmed because any allegations of rights abuses involving such a high-profile prisoner could jeopardize U.S. financial assistance.

According to the U.S. government, Valdez was part of the Sinaloa Cartel before one of its chief leaders established his own organization.

That leader, Arturo Beltran Leyva, was killed in December 2009 in a shootout with the Mexican military.

His death was believed to have left the throne of power to Valdez, but also left a target clearly on his back. He was in a war with Beltran Leyva's brother, Hector, for control of the business.

While Valdez hasn't been formally charged for carnage in Mexico, he's widely been blamed for killings and rivals have sought to mock him by hanging and mutilating his soldiers, as well as leaving public messages with insults.

The attorney, Schaffer, said his client was on the run and knew time was running out.

"You die, get caught or spend your life looking over your shoulder," he said.

"We thought there was a distinct possibility," he said of Valdez's capture, which he found out about through a Valdez family member. As a result, Schaffer had been hired to look at options in the event Valdez was captured.

He hopes he'll be sent back to the United States.

As of Monday night, Schaffer said he was still trying to find his client. 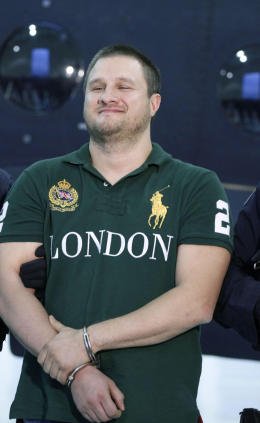