A Drug Buy in El Paso

It may look like any other afternoon along this busy shopping strip outside El Paso, Texas, with people walking in and out of stores and restaurants and traffic moving at a steady clip. But inside a particular establishment, one of our sources is waiting to buy nearly $20,000 worth of cocaine from a local gang member.
The operation represents one of the many ways we are fighting the drug trade along the Southwest border. From small street-level drug buys to major cases targeting the highest levels of cartel and gang leadership, our agents and law enforcement partners attack the problem from every angle to gain intelligence and to disrupt and dismantle trafficking organizations.

On this day, agents from our criminal enterprise/gang squad are working with local and state officers to build a case against the gang. Members of the team—all in plain clothes and driving unmarked vehicles—are inconspicuously and strategically parked near the site of the establishment. The source inside is wearing a wire, and his conversations can be heard on car-to-car radios. If anything goes wrong, the source will say a code word and the team will quickly be inside.

At a final briefing before the operation began, the team leader—one of our veteran agents—spoke to the group in a parking lot behind a nearby municipal building. He went over the plan again in detail, stressing the danger involved and the need for extreme caution to make sure everyone stayed safe. Then, like a basketball coach before a game, he gathered the team in a circle and read aloud the Bureau’s policy on the use of deadly force.

An hour later, the source was inside, but the target wasn’t—he called to say he would be late. While they waited in their car and listened to the radio chatter, two of our agents on the operation—we’ll call them Smith and Johns—explained the economics of the drug trade in El Paso and across the border in Juarez.

“Where you have gangs,” Smith said, “you have drugs. And in El Paso, all the drugs are coming from across the border.” A kilo of cocaine in El Paso costs about $20,000, but can be sold in Chicago, Atlanta, New York, or Miami for more than $30,000. There is a lot of money to be made.

Finally, the target arrived, but without any drugs and only vague promises to produce them that day. The team leader sent a text message to the source to leave, and then canceled the operation. “We’ll try again tomorrow,” he said.

False starts and dead ends are typical in such drug cases, Agents Smith and Johns said later. But the work is important. Even though small drug buys won’t break the backs of the cartels, Johns explained, “We gain a lot of intelligence from these operations, and sometimes we develop new sources as a result. And every kilo of coke we take off the streets is one that doesn’t make its way to American kids.”... 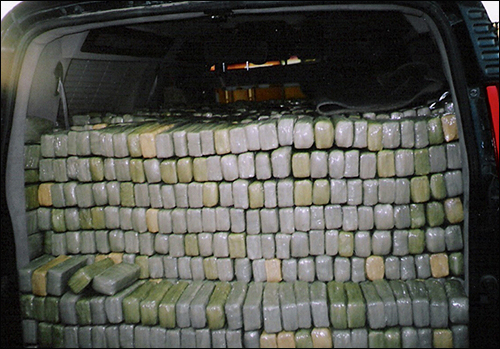