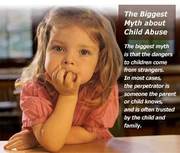 Adults who abuse children typically try to build a connection with the child before initiating abuse; experts call the process “grooming.” They may also use emotional coercion or threats.
Children who have been sexually abused can develop special behavioral problems. Many will act out their anger and or other feelings that may seem inappropriate. While it is certainly desirable to set limits on inappropriate behaviors, it is important to keep in mind that children who have been abused have special need. Behind every behavioral problem is a reason. Talking with your child and bringing such issues up in therapy, can help to gain an understanding of why your child is behaving in certain ways. Once something is understood it will be easier to find an answer, which will lead to eliminating the problem behaviors altogether. It's important to remember that punishment is not always an effective way to eliminate problem behaviors, and some behaviors, such as bed wetting, may not respond to discipline at all.

Sexually Acting Out. Can be defined as excessive and/or public masturbation, constant focus on sex and/or sexual behaviors, often stems from a child having been forced to perform sexual acts. Children can be confused between sexual behavior, sexuality and feelings of love and affection. Sexually abused children have not been allowed to develop their own sexuality according to their own developmental time frame. This means that the body and mind are in different place, and there may not be adequate impulse control. Special attention should be given if you notice a child who is acting sexually with another child, particularly if there is a big age difference.
Explain the difference between public and private behaviors. For example, exploring our bodies is o.k., but it is not to be done in public. Explain that sexuality is best kept private, as it is a very special thing we do not share with everybody! Also stress the difference between private and secret. Sexuality is never a secret!
Explain the difference between sex and love, and how we can express non-sexual love for people and reserve sex for when we are grown up. There is nothing wrong with wanting touch, like a hug or pat on the back.
Keep in mind that sexually abused children have a tendency to sexualize things that are not usually sexual. Help your child figure out the difference!

Remember that you can give your kids good information about sex and sexuality and still teach them your own values. Hiding information about sex from you kids will only serve to make them more vulnerable and confused. Sex education is very important, and if you don't educate your children, someone else will!

Child sexual abuse has been reported up to 80,000 times a year, but the number of unreported instances is far greater, because the children are afraid to tell anyone what has happened, and the legal procedure for validating an episode is difficult. The problem should be identified, the abuse stopped, and the child should receive professional help. The long-term emotional and psychological damage of sexual abuse can be devastating to the child.

Child sexual abuse can take place within the family, by a parent, step-parent, sibling or other relative; or outside the home, for example, by a friend, neighbor, child care person, teacher, or stranger. When sexual abuse has occurred, a child can develop a variety of distressing feelings, thoughts and behaviors.

No child is psychologically prepared to cope with repeated sexual stimulation. Even a two or three year old, who cannot know the sexual activity is wrong, will develop problems resulting from the inability to cope with the overstimulation.

The child of five or older who knows and cares for the abuser becomes trapped between affection or loyalty for the person, and the sense that the sexual activities are terribly wrong. If the child tries to break away from the sexual relationship, the abuser may threaten the child with violence or loss of love. When sexual abuse occurs within the family, the child may fear the anger, jealousy or shame of other family members, or be afraid the family will break up if the secret is told.

A child who is the victim of prolonged sexual abuse usually develops low self-esteem, a feeling of worthlessness and an abnormal or distorted view of sex. The child may become withdrawn and mistrustful of adults, and can become suicidal.

Some children who have been sexually abused have difficulty relating to others except on sexual terms. Some sexually abused children become child abusers or prostitutes, or have other serious problems when they reach adulthood.

Often there are no obvious external signs of child sexual abuse. Some signs can only be detected on physical exam by a physician.

unusual interest in or avoidance of all things of a sexual nature
sleep problems or nightmares
depression or withdrawal from friends or family
seductiveness
statements that their bodies are dirty or damaged, or fear that there is something wrong with them in the genital area
refusal to go to school
delinquency/conduct problems
secretiveness
aspects of sexual molestation in drawings, games, fantasies
unusual aggressiveness, or
suicidal behavior
Child sexual abusers can make the child extremely fearful of telling, and only when a special effort has helped the child to feel safe, can the child talk freely. If a child says that he or she has been molested, parents should try to remain calm and reassure the child that what happened was not their fault. Parents should seek a medical examination and psychiatric consultation.

Parents can prevent or lessen the chance of sexual abuse by:

Telling children that if someone tries to touch your body and do things that make you feel funny, say NO to that person and tell me right away
Teaching children that respect does not mean blind obedience to adults and to authority, for example, don't tell children to, Always do everything the teacher or baby-sitter tells you to do.
Encouraging professional prevention programs in the local school system.

This group does not have any discussions yet.

You need to be a member of SEXUAL ABUSE, RAPE, INCEST to add comments!

Comment by Darcy Delaproser on January 30, 2011 at 5:53pm
Advocates for Abandoned Adolescents (A.A.A.) is to bring National awareness to the Juvenile Justice Laws across the USA...